So yes people, this post is about Valentines Day but mostly to share with you all what Nick and I will be doing and what I home made for him as a gift!

I had been going back and forth about whether I should even do anything because I feel like I have run out of ideas (lol). We have spent so many valentines day’s together that I have thrown all my creativity back in the early days, I have very little left. However!! There is this beautiful thing I like to call Pinterest and I got the greatest idea to get some hershey kisses and put little notes on the bottom of them!

Last year I made him the most epic valentines day gift ever because we usually go on a weekend long ice fishing trip, it’s a good time and don’t worry ladies that read this, there is a heater in the hut so I’m not one bit miserable! But this is what I made him last year and needed to either top or meet the criterion of this:

I bought Nick and I both tumblers for valentines day because we always go ice fishing and I figured it would be nice to have for like a warm drink (or cold beer). So I wanted to fill it at least with hershey kisses or something and then I saw this picture on Pinterest and it was PERFECT! 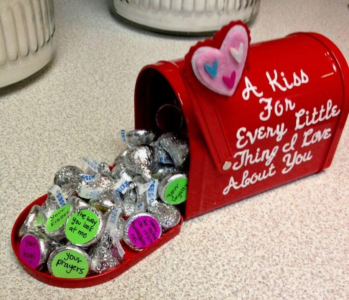 I saw this and just about melted, first of all this tiny mailbox is the cutest thing ever and second, its the best idea ever! Now, I realized about a half second too late that this person just used the round sticky dots you can buy from like the dollar store that people use in yarn sales to write the prices on….but I chose the tough route and I decided to MAKE and CUT every single one of my circles that was going on the bottom of my Hershey Kisses . In case anyone is wondering, the bottom of a kiss is about the same size as a nickel! Anywho, I began using index cards while at work and started drawing circles and began brainstorming with what I wanted to put on each kiss and ended up with 54!! That’s a lot of things to just sit there and brainstorm up about your significant other!

These are the index cards with everything written on them, then I cut out the circles and laid the circles down on the table face down. 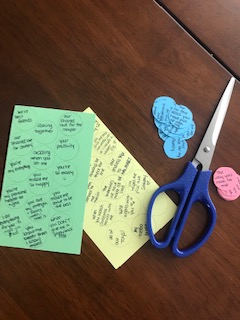 After I had laid them face down I decided to use Elmer’s glue to stick them on. Totally not ideal but it got the job done and it looked good once it dried. 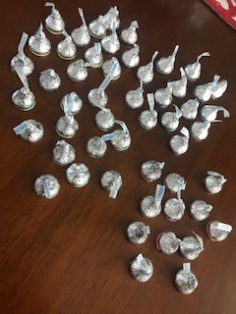 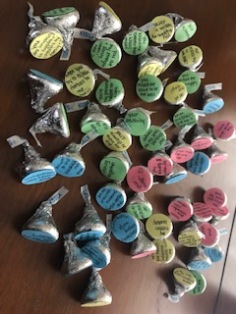 I had put them on top of the circles and a couple times pushed them down to try and prevent the edges from curling up, which clearly didn’t work, but I tried and I got glue on the table so that was enough of that.

I am so happy with how this turned out and I hope he likes it! Happy Valentines day to all and I hope you guys either have fun celebrating or anti-celebrating today!

Anything you did special for your significant other? Share below! I want to hear!!!